Nadine Dorries As A Poker Player

Why would you have a person who is just a back bencher, has not done anything to change the world and has no potential for advancement to higher position in the governance of the UK as being worthy of a poker profile? Well she maybe the lowest of the low in terms of parliamentary power structure, but she has done what Gordon Brown, David Davis, Ed Milliband and Ed Balls could not do, she has begun the end of David Cameron’s tenure as Prime Minister.

When she said that David Cameron were out of touch (which most leaders are by their elevated position), she could have left it at that, but she went further and said “….unfortunately, I think that not only are Cameron and Osborne two posh boys who don’t know the price of milk, but they are two arrogant posh boys who show no remorse, no contrition, and no passion to want to understand the lives of others – and that is their real crime.”

To a party that once tried to position it’s self as a party of meritocracy (Ted Heath, Margaret Thatcher and John Major), to be seen as a party of ‘arrogant posh boys’ by one of their own members will hurt and hurt bad.

Nadine Dorris as a  poker player would the type of person who was humiliated, but noticed a weakness within the player that humiliated them and decided that if they are going to be knocked out of a tournament or the game, they are going to do as much damage as they can to that one particular person. They also reason that by knocking them out they may scare other players not to take them on and therefore secure her position so that her table profile raises and people avoid her like the plague unless they have a devastatingly serious hand.

It seems that Nadine Dorris is a dab hand at turning the tables on political foes. She managed to get political advisers sacked for implying that she was having an affair with another MP. She managed to maintain a position of being a Christian, anti-abortion warrior yet flexible enough to have had an affair with a married man! It was stated that the man was married but separated and the relationship only started when he left the marital home.

The first time it came to notice that there was problems between Nadine Dorries and David Cameron was during a Prime Minister Question Time  in which she called on David Cameron to resist Liberal Democrats within the coalition government. David Cameron not wishing to upset his coalition partners turned it into a joke that Nadine Dorries was post-menopausal. By saying she was ”frustrated” was code word that ‘Mad Nad’ needed a good ”seeing to” to correct her unwomanly behaviour. In a male dominated parliament such sexual innuendos and put downs are de rigueur. This episode was never going to be forgotten and after a couple of months in which the two most powerful men in the UK began (David Cameron and George Osborne) began to look like the Laurel and Hardy of politics, it was an open goal that Nadine Dorries could not resist. 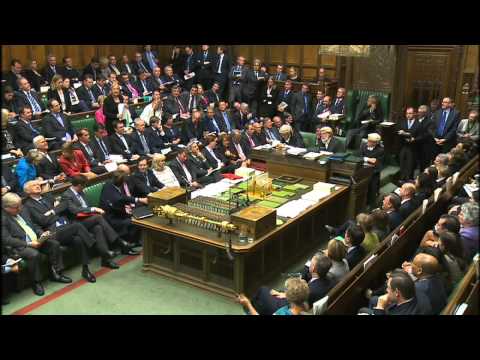 The reason why the ‘price of milk’ quote was a devastating slur is that it comes from a person who is not posh and had to work to earn her money and position, while Cameron and Osborne were basically given the job without ever having to work for it or even having to go to work of any sort. The slur reinforces the image that they are playing at being Prime Minister and Finance Minister. This maybe unfair, but there is no evidence that it is not true.

Nadine Dorries poker skills in the political theatre maybe be rough, tough and unforgiving but so was growing up in a council estate and breaking into a political party not entirely receptive to working class women on the make. David Cameron has got to nullify Nadine Dorries and the best way he can do this is by making her a cabinet minister. She has broken the taboo of Tory Party class warfare by attacking Cameron and Osborne class. If the public believe that his upbringing is the reason why they are suffering he is finished. That impression is beginning to take hold and the funny thing about it is that Cameron has not got a clue that it is happening.