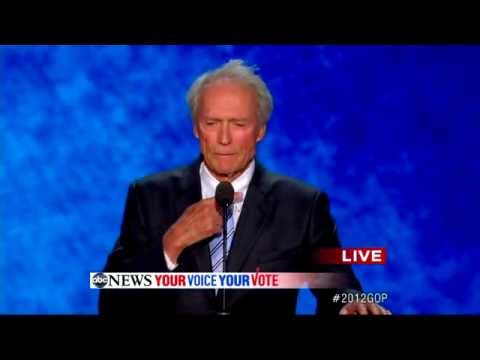 It was brilliant to watch! Almost like a Monty Python sketch on acid tabs. Clint Eastwood completely over turned the concept of a political endorsement. The 82 year old went on the Republican stage and attacked the leaders who did not consult with Russia about Afghanistan – Clint blamed Obama but it was Bush who went into war with the Taliban. He attacked Gitmo not realising the GOP loved Gitmo. He then had a rather touching conversation with an empty chair which represented President Obama. It was like you walked into a mind of someone who has completely lost the plot and was desperate to explain why he is not sure why he has lost the plot.

For sometime it has been clear that Lehman’s Day 2008 did more damage to America than just them losing a lot of money. It scared the bejesus out of what they once held dear. Certain sections of society thought nothing would get in the way of Ronald Regan’s voodoo economics, but it did when the banks decided that casino betting was better than traditional banking – and they went for it! Now we have a group of people who will say anything and do anything that will make them feel better so when Paul Ryan makes a bid for the leadership of the Grand Ol’ Party 2012 by basically lying (lying so much that even a Fox News corresponded had to call it dishonest and wrong), he is now being bet on (primarily by yours truly) because anything can happen between now and November 6th!

Clint Eastwood finally proved my point when he went on stage and did some sort of Dada inspired monologue which was both embarrassing, funny and totally irrelevant to the issues of the day. Please watch the video it is an amazing piece of cruel entertainment from an icon of Americana. I had to stop playing poker to watch it in shock. Afterwards I put another couple of pounds on Paul Ryan being elected President 2012 at 899/1.