He may never have been a big name in football, and, he will never get that chance to really prove the value of having a guy who plays football the right way. For Christian Rogelio Benítez Betancourt otherwise known as ‘Chucho’ died of a heart attack at the age of 27!

He was a man all footballers want in their side, a player all opponents knew was going to be skilful and difficult to keep quiet. The only reason he is not spoken in the same way as Platini. Viera and Robson was that he never scored a lot of goals although he would have been involved in nearly all the goals scored when he played.

The fans always loved him because he gave his all and he really wanted his team to win. Not only did he have the will to win, he also played football with a smile on his face. He enjoyed the game and the fans could see that he loved the game. There is nothing worst for a football fan to be supporting a team which has players who do not care and can’t be bothered. Watching football has been a luxury item since the Sky Sport started chucking money at the sport so that they can manipulate the next generation of supporters into being ‘glory hunters’ ie supporters who live miles away from their team and never go to their teams game.

In this midst of cynical marketing and inhibited greed Chucho would try his best and because his enthusiasm meant the opposing team usually had to double up of Chucho which then his players more room to attack the goal.

Being 27 he will now leave his twins and a wife. The children will be gutted as he came across as a real family man and dutiful husband.

Playing for Birmingham City was probably not the highlight of his professional career but he was loved and respected at the club. With Christian Rogelio Benítez Betancourt on board Birmingham City went 12 games unbeaten, unheard of before at St Andrews. Many at Birmingham City will rue the day Alex McLeish never sorted out a deal to keep him at the club, but then again when did McLeish ever thing about the club more than himself?

A tribute to Chucho 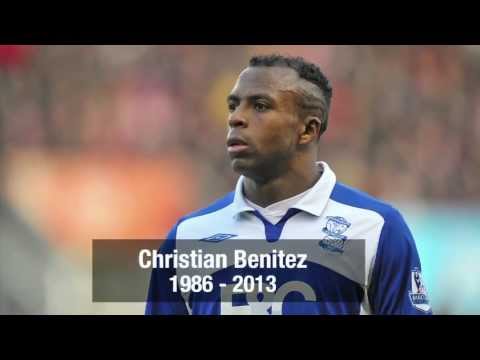