Rob Ford – We Salute You!

On paper I should not want this guy to succeed! He is a ‘conservative’ which usually mean he doffs his cap to his ‘betters’ and grovels at the feet of the powerful. Conservatives in my mind want things to remain in a rigid non fluid form in which only a few can make it and the rest should lump it! Well as a natural born rebel it is my duty to upset the apple cart and turnover the money changers table in the temple. So why do I like this guy?

Well it is not because he is a drunk driving, crack smoking, whore chasing, pussy eating volcano of fury. No! It is because he actually drives his own car, unlike most mayors, he takes direct call to his office from constituents, and , apparently he has interjected directly into a constituents problem when it would have been easier to have let his underlings take up the issue. In essence he is the type or representative that should be elected to high office.

Since he has such a high upside it i.e inevitable that he has a massive downside. Which means he raises hell every now and then which causes him and his supporters problems. Yes he is a clown but if he was my mayor I would be glad to have him as my clown. Nothing wrong with a clown who does the right thing. The road to hell is paved with good intentions, but, you shall tell a person by his deeds and his deeds are right and positive.

I hate cocaine and anyone who has read my rants about the uselessness of cocaine and the people who use cocaine will no doubt be astounded that I would support a crack addict. Well I don’t and would like to do to Rob Ford what he wanted to do in one of his famous rants. However, Rob Ford is human and as a human there will always be a not so good side. Hey Hitler loved animals after all.

So at the end of the day, Rob Ford seemed to have been a great proactive leader who is loved by his constituents. Yes he is a conservative but he does seem to have a strong libertarian side. There are stories that he bullied staff and asked for sexual favours from female sub-ordinates. If this is true then he will have to suffer the consequences, but, sometimes accusations are made when a man is down for all sorts of reasons so let the litigations begin and Toronto keep this man he is comedic and political gold and we need people like this. 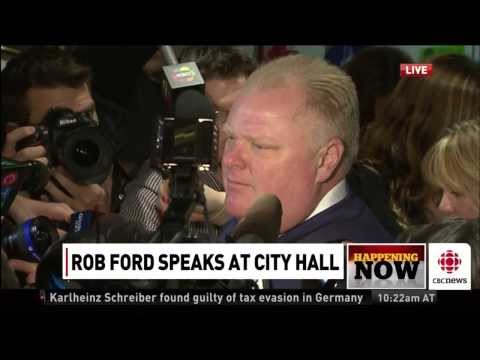