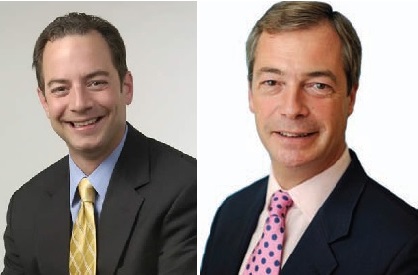 Nigel Farage or Reince Prebus has won the EU Referendum and yes we are still pushing the conspiracy that Nigel Farage and Reince Prebus are one of the same. It is interesting that Donald Trump who is the presumptive Republican Party candidate for US President called off his campaign and came to Scotland the day before the UK vote, and, I presume he is here to take orders for his latest campaign maneuvers from his overlord Nigel Farage.

Will Farage become the UK Prime Minister, not a chance he has bigger fish to fry in the US. His job is done and the EU will now break up when the UK leave. Funny how Nigel Farage first said that The ‘Remain’ campaign had won, then retracted his pronouncement and said it was too close to call. Who tipped him off?

The one person who did get this referendum right was The Magical Tipster who was the only tipster to call the outcome when the ‘Out’ vote was 2/1 (3). The price went out to 8/1 (9) before plummeting to 1/3 (1.333) hours after the count started and when it became clear that things were going against the ‘Remain’ campaign. This makes up for the 2015 General election in which he got wrong, but, does carry on the good work he has done tipping Donald Trump at 7/1 getting the GOP nomination and now this Brexit vote.

So, now will begin the turmoil of getting out of the EU. Scotland will agitate to have a second referendum to leave the UK and will probably get it. Breaking up the UK leaving England, Wales and Ulster will create further turmoil. Ulster may start wanting to leave if the UK government stop giving them money because of the recession that will surely come now?

David Cameron will leave as Prime Minister because he lost the referendum and now the break up of the UK. Who will replace him? Only The Magical Tipster will know.