It Has Been Funny But I Need A Rest

It looks like Trump has failed to win a second term and failed to usurp the election by instigating a riotous insurrection, which looked like a bunch of middle aged soccer hooligans having a ‘moment’.

Yes these people have guns and anger, but really, how were they allowed to get away with this?

Trump must be the most persuasive con man in history! From Birtherism to ‘Stop The Steal’ he has managed to get functionally literate individuals to pay up and devote time and effort on basically provable nonsense. For that I have to give him credit.

We made money from this guy, not as much as we could of because we could not believe that this foolishness could be maintained for so long and with so much depth that first 60 million in 2016 and then  74 million people would seriously go out and vote for Trump in 2020, but they did!

I loved it when it happened especially when you can literally fill your boots with lovely cash and have a laugh doing it. Watching nominally sensible people doing crazy things is always amusing, but, like overdosing on candy there is a price to pay. 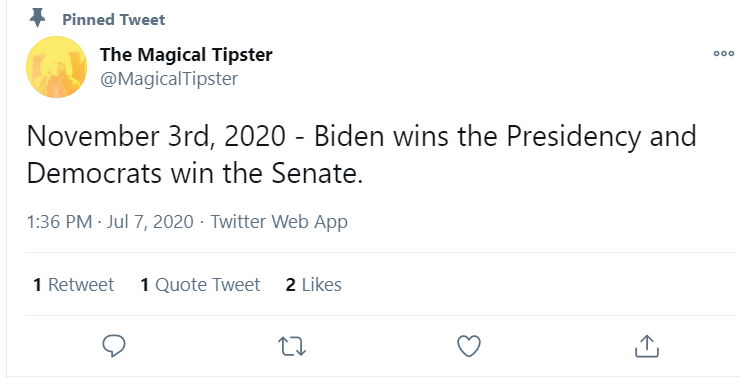 Eating too much of a good thing will give you heart burn. So it is time for boring and sensible life. Call it old age but the need for hilarity at the stupidity of people is no longer fun. There must be a reason why some nice people lose their mind? I have heard everything from globalism to white supremacy, from religious extremism to mind control, from lead in the water to MMR vaccination.

The list is endless for the reason why Trump could get so many people to follow him and do loony stuff. Yes there were your politically extreme odd balls but they were joined by a number of ordinary middle aged, middle class individuals who do not fit the description of treasonous, radicals or murderous fascist, yet they acted like this.

So hopefully with Biden coming in and delivering on sensible things such as reasonably priced health care, decent wages, reasonably priced higher education and a lovely life things will calm down and the USA can lead the world to a moment of quiet where the only disturbance is toddlers screeching while playing hopscotch.