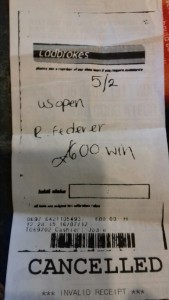 The bet above was placed on Roger Federer to win Wimbledon a half an hour before the Wimbledon Mens final. Apparently the manageress called the office and asked if she could put the bet on, they confirmed she could and placed it with the price of 5/2. However, the manager wrote ‘US Open’ as well […]

At Wimbledon July 8th Andy Murray the Scottish tennis player takes on Roger Federer the champion from Switzerland. Murray is looking to be the first Wimbledon champion from Great Britain in over 70 years. He is therefore British unless he loses he will revert back to being Scottish! The reason for this dichotomy is that Andy […]