An Interlude From Grinding Pt4

There is a football team called Millwall and they have a reputation for soccer hooliganism. I have witnessed the hooliganism when I was going to a friends wedding and got caught up in a middle of a full scale riot involving Millwall fans, apparently they lost 1 – 0 to Sheffield Wednesday.

Now Millwall are in a fA Cup game with Staines a place made famous by Ali G. Staines is socially a million miles away from Millwall and the residents are up in arms about the potential for trouble involving Millwall fans. So the wags and jokers of Millwall have been ‘winding up’ the residents on the Staines News website, promising murder and mayhem. Some of the comments have been hilarious and will take ages to read which means that it keeps you of the table for ages with constant need for tissues for the tears of laughter. Here are some of the comments, spot the one comment which maybe true?

I was visiting some pals in Belmarsh nick at the weekend and when I mentioned this upcoming fixture one of them said ‘shhh, look over at that wall’. Part of the wall looked a little damp, on closer inspection I noticed that there was a three ft hole covered with papier mache. My mate then gave me a coded message to take out with me. It seems that there is to be a breakout by 50 hardened Millwall villains on the morning of the game. I genuinely fear for the residents of Staines, my mate is the least nasty of them, but he’s in for selling kids to Albanian pimps and dealing crack to muggers who rob our war veterans.
God help you!

I hope none of the above is true. I live in Wheatsheaf Lane and we held a community meeting last night to voice ouur fears & concerns. The police seemed to play down the fear of violence but having looked at Millwall on youtube this morning and the comments above, I’m very worried, especially as we have just bought a new car and got new windows.

Any Millwall thug who interferes with my wifes bush will have me to answer to.

I’d just like to remind residents in Wheatsheaf Lane that parking any kind of vehicle in your rear garden is a breach of the road traffic act 1966 and would result in a fixed penalty notice. I personally will be attending a grenade diversity training course that weekend but our community officers will be available to give commendations for the best use of weapons of mass destruction, and geraniums.

November 18, 2009 1:46 PM
Report This Comment
Yep my view is that ‘Concerned Resident’ is the genuine one. Here is the brilliant Ali G doing General Levi’s Incredible and a video of a West Ham United v Millwall riot. 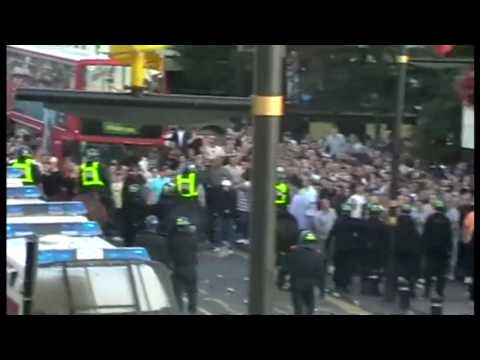