Rake races seem like a good thing but I am getting more suspicious of them as a fair enterprise for the ordinary online poker player. Clearly those who use bots will have a big advantage, so what will be the point of a non bot using player have in going for these promotion?

Therefore, if online poker website will not ban poker bots they should at least eliminate them from rake race promotion, giving the average player a better chance of actually winning or getting a significant prize in these competition. Otherwise they should not have these promos because they are nothing more than a benefit for programmers and will not enhance the reputation of online poker website.

Hopefully, when the US allow online poker they will somehow regulate and outlaw bots from being used. This would be a good thing and would set a precedent for other countries to outlaw bots.

Just heard that the voice of darts Sid Waddell has died and was buried a few days ago. For those who do not know about Sid Waddell he was an announcer who had a great line of understatement. With his thick geordie accent he would illuminate an ordinary pub game and make it into the equivalent of the Cold War. Here are some of his great sayings:

“The atmosphere is so tense, if Elvis walked in with a portion of chips, you could hear the vinegar sizzle on them.”

“There was less noise when Pompeii was swamped in lava! Absolute pandemonium here! Barmaids are frozen like Greek statues watching! No beer’s been served! Everybody’s eyes [are] absolutely hooked on that board.”

“His eyes are bulging like the belly of a hungry chaffinch.”

“He looks about as happy as a penguin in a microwave.”

“Bob came on like the Laughing Cavalier … now he looks like Lee Van Cleef on a bad night.”

“It’s the nearest thing to public execution this side of Saudi Arabia.”

“When Alexander of Macedonia was 33, he cried salt tears because there were no more worlds to conquer … [Eric] Bristow’s only 27.”

This lad has more checkouts than Tescos.”

“That was like throwing three pickled onions in to a thimble.”

“He’s not just an underdog, he’s an underpuppy.”

“William Tell could take an apple off your head, Taylor could take out a processed pea.”

“There’s only one word for it – magic darts!” 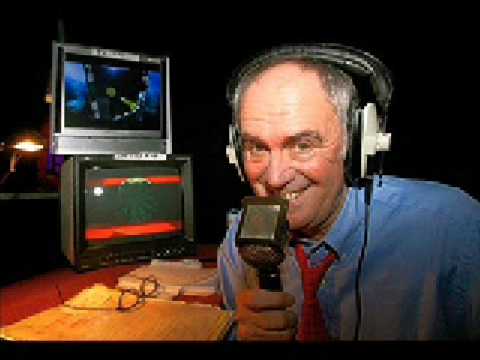