One of 20th Century more significant figure died today. Margaret Thatcher, had utter changed the way the UK and the World behave that it is clear she will be up there with Mahatma Ghandi, Mao, Mandela etc as being a truly transformational figure and icon.

Born into a lower middle class background Mrs Thatcher initiated the greatest change in post-war Britain. Her politics changed a fairly rundown post-industrial society into a two tier service economy reliant on the financial services. She embarked on a redistribution of power from unions to employers, from the masses to the elites and plutocrats, from collectivism to individualism, and, from nation state to transnationalism.

Some of her energy was wasted on things such as Section 28 the non publicity for gay rights. Well the country is now about to legalise gay marriages. She tried to prop up South Africa, but the tides of history swung against her. She tried to penalise children from bad families in an attempt of shocking the parents into better behaviour. However, this moral crusading was undone when her gangster son (Mark Thatcher) was involved in an attempt to steal a nations oil (Equatorial Guinea).

She was given the nickname ‘The Iron Lady’ by the Soviet Union and instead of being embarrassed by it she embrace it as a sign that the Soviets were scared of her. When people within her own government were making snide remarks about her style of conviction politics she immediately referred to them as ‘wets’ as against her ‘dry’ supporters. Being wet was seen as a weak character with no stomach for the fight. When she went for the trade unions is was because ‘they were the enemy within’.

Worldwide apart from regaining the Falkland Islands her biggest success was seeing the end to the Berlin Wall and Soviet style economies. At home her biggest failure was the demolition of the unity of the working classes and the end of strong working communities with the implementation of primary, secondary and tertiary labour markets.

Margaret Thatcher is one of those politicians in that she was a phenomena of her generation and was probably more popular abroad than she was at home. She won three elections but was sacked because she could no longer see that her supporters had ambitions for themselves and she was in the way. This was never going to end nicely and she went on to say that her greatest achievements was New Labour with Tony Blair and Gordon Brown. 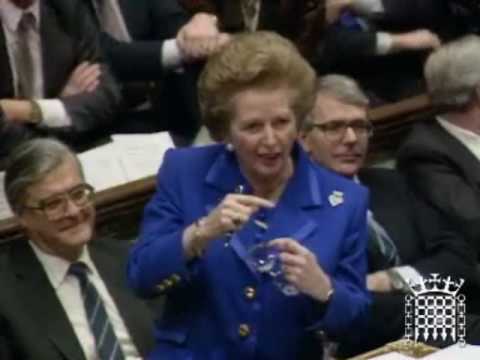