So David Cameron believes he can lose the May 2015 General Election and still be Prime Minister in June 2015!

That is some gamble if he thinks that possibility is viable. If he loses the May 2015 by having less seats than Labour then he has lost 2 elections in a row. OK the Tories had most seats in 2010, but they were looking for overall majority ie having more seats than all the over parties put together. Hence, it is a lost when you have to go into a coalition when you should have been the sole boss.

Now with the nonsense over the TV debate this is showing that David Cameron is not a man of his words. He must debate Ed Miliband or he can kiss the election goodbye. Only an absolute true blue Tory would support a guy who ducks out of a debate with Wallace from Wallace and Gromit.

Clearly David Cameron has been badly advised here as he cannot think that he would be leader of the Conservative  by running away from Miliband and losing May 2015?

I do know that The Magical Tipster is looking to get a very exotic bet on David Cameron to not be Prime Minister but to be Tory leader at Christmas 2015. This must be a 16/1 chance at worst?

Ed Milliband is a joke .
The only way is compassionate care.
Experts unfettered access to PMQ’s.
TeamGB. We are and always be

UK employment rate is G7’s best.
Future for families across Britain is great.
Television debate is nothing but a distraction.
Here so that it never happens.

Sure, the UK is fully protected.
Not crush our spirit or our values.
Your support is hugely appreciated.

Read this important post:
Milliband is weak and ineffectual.
But never on ITV, just believe me. 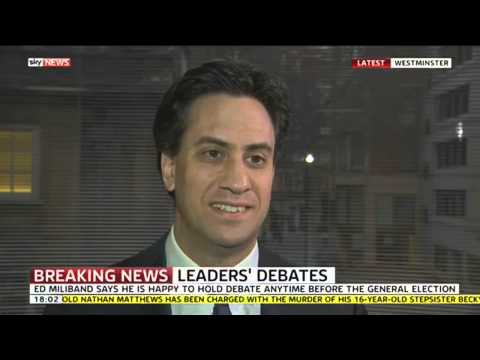