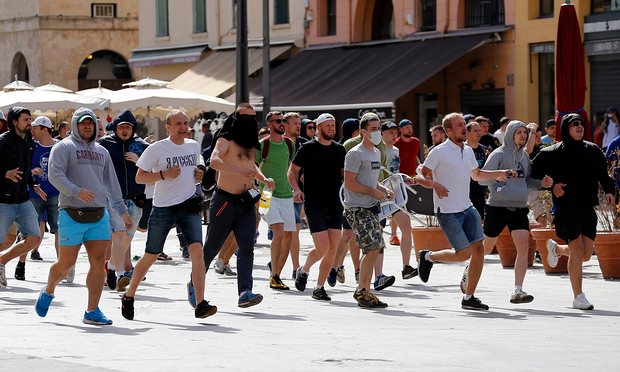 It had to happen. There is a new bully in town and the English have been relegated.

Last Saturday after all the hooligan books, films, study, pictures and tales, the English hooligan culture got battered by a new more extreme form of thuggery from Russia. Apparently these devolved human beings were flown over by the Russian government to give the English thugs a good beating to show them who is now top dog.

In a city that is in lock down, the Russian managed to sneak flares into a stadium and let them off signalling the attack on the English. They wore English football shirts and surprised the drunken English supporters jumping all over the aged hooligans from Blighty’s head.

The Russian minister of sport thought it was a glorious exhibition and Russian MP’s have been celebrating the ‘victory’ over the fabled English footballing ‘firms’.

What is now going to happen to all those films about the glory of grown men fighting, doing drugs, getting pissed and buying over priced jumpers? A whole industry has been destroyed because the youngsters were so stoned out of their heads that a bunch of steroid up meat heads who love Hitler and hate gays, beat the hell out of them.

Ah well, the continuing devolution of humans gain speed. When Russia get involved in culture they usually go over the top. Just look what Stalin did with collectivism? Have you ever heard a decent Russian pop/rock/dance tune?

To say they are Upper Volta with nuclear weapons may do them a disservice, but, it is not that far of the mark. Instead of doing the Soviet thing and decapitating the oligarchs, they beat up poor immigrants, camp gays, and Ukrainians. All the sort of people who do not really control power. I have said it once and I will say it again if Ukraine had nuclear weapons, Crimea would still be Ukrainian.

The foreign policy of Russia is now about being hooligans and thugs. Nothing subtle and nice just distraction and duplicity covered in a iron glove. The USA plutocrats arn’t really interested as the Russian oligarchs can be bought and sold like cheap underwear, while the Russian citizens get off on football fighting, migrant hunting and queer bashing.

Welcome to the Russian version of a Clockwork Orange.