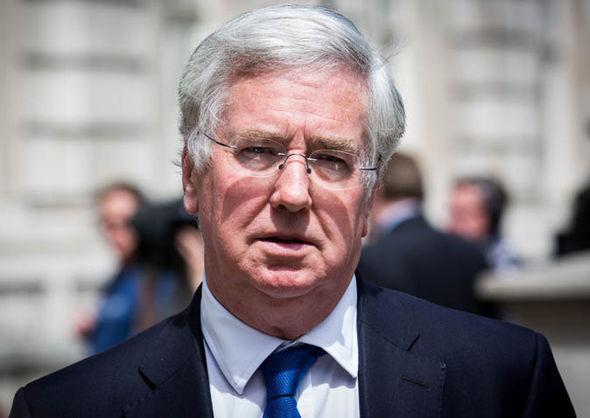 Sir Michael Fallon is the first of a very long list of men and possibly women who will be sacked for sexual impropriety.

Apparently what did for Fallon was that he touched a right wing female journalist knee some years ago and as part or not part of the #MeToo campaign, Julia Hartley-Brewer  decided she would let people know that Michael Fallon touched her knee and that she threatened to deck him if he did it again.

Why am I being cynical about this? Well Julia Hartley-Brewer is not known to be very supportive of women and feminism. She cried fowl when Michael Fallon had resigned saying it was ridiculous him resigning over touching her knee, but, it was all part of a plan to make a scene and promote a anti-gay marriage ambitious chief whip Gavin Williamson to a position where he can make a move to be Prime Minister when Theresa May leaves.

Gavin Williamson is a hater of Boris Johnson, so expect the dirt to be spread on the clownish Foreign Secretary and his colourful extra-marital hobbies.

So how do the nation deal with this? Sex like power is a great motivator. If a person has been reprehensible in the pursuit of sexual relations then how is it going to be judged. Obviously rape is the nadir of criminal behaviour but there are other behaviours that can be just as harmful and can destroy the mentality of the victim.

The argument that men can and have abused their position in a society that is very male orientated to get sexual favours from women who wanted to ‘fit in’, have a career, feed their family is not new, and there is no argument that this has happened and will continue to happen in a power dominated society. To prove this argument of it being a male orientated society, just ask the question would you employ a male nanny or male au pair?

The next question is how do you get to have sexual relations? Unless you ask you will never receive. So when is a sexual proposition acceptable? If a person makes a sexual proposition continually is that harassment or just persistency? Do you need to ask preliminary questions to see if you should ask the concluding deal making question? If like Julia Hartley-Brewer and Andrea Leadsom (who accused Michael Fallon of making rude jokes) you have built a career on not being politically correct, how can you suddenly demand that your fellow political traveller become politically correct?

In the end how the right wing deal with this issue should be very informative to how society will go. The right wing have for years attacked ‘political correctness’ saying it was OK to be rude and not apologise. Now they are having to deal with the issue of sexual misconduct, sexual criminal behaviour and Donald Trump the most deviant political leader of the right wing world wide.

Yes everything returns to Donald Trump and his leadership of the anti-political correct movement. It is why he was elected as he took charge of the right wing nutjobs who were being encouraged by the right wing establishment and Putin’s secret service to appeal to the bass of human personality. Alt-right is the anti-political correct movement because they want the ability to abuse and subjugate people on any type of criteria, it is what they do.

So if you do not abuse people on sex in all its form then sit back and watch the anti political correct movement go into a tail spin of denial and political manipulations.