Boris Johnson Is Out 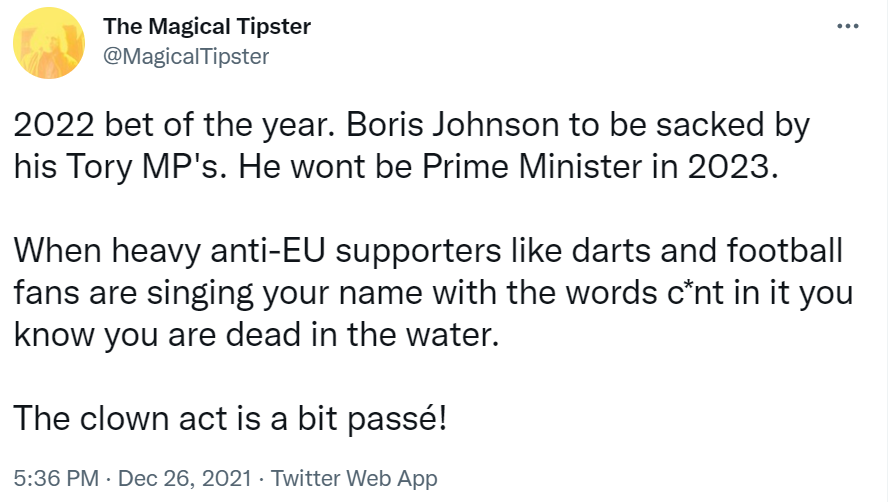 The Magical Tipster gave one of his usual winning political tips in December 2021 in which it was predicted that Boris Johnson would be gone and he would not be Prime Minister in 2023.

This is crazy and already the Scottish leader Nicola Sturgeon is already saying that this is wrong as Scotland did not want Boris Johnson or any Tory party choice should be effectively in charge of her country.

This is going to lead to more constitutional damage and probably lead to the break up of the United Kingdom. The only way for this to be stopped is for a general election is needed.

A general election is needed as the country is in crisis. Brexit has been a disaster, the economy is tanking, there is a war in Europe and the world economy needs sorting out especially the gap between rich and poor. Plus there is the growing issue of climate change which is getting worst and will dwarf all in terms of crisis.

There is also the idea that Boris Johnson could still be Prime Minister if during the 3 months of his caretaking a really hot war breaks out in Europe and Boris Johnson decides that it is not the right time for a new leader…why not keep the one in place now?

So although we are celebrating winning the bet lets not forget that David Cameron called Boris Johnson the greased piglet for his ability to get out of tough situations.